Convergence is the prepackaging or collapsing of multiple tiers within the data center -- typically compute, networking and storage -- into a single unit. The goal of a converged architecture is to simplify IT and improve the time to value, which appeals to overworked and understaffed data centers.

But part of the challenge with adopting a converged vs. hyper-converged system is getting the timing right. With the exception of the software-only model, an organization needs to replace or significantly add to its server population to implement convergence. The first step toward convergence could also be a new project, where the turnkey nature of the platform allows for a faster time to value.

The converged and hyper-converged market was nonexistent five years ago. Now it often overwhelms IT professionals with choices. Selecting a system from the right category is critical for IT planners, so they can complement existing IT investments and meet the long-term goals of the organization.

The first step is to decide whether a converged vs. hyper-converged infrastructure will work best for your environment. Converged architectures prepackage the three tiers, but use discrete components that are typically from separate manufacturers. These products are usually pre-integrated and, in theory, all an IT administrator has to do is plug them in and begin installing applications or creating virtual machines (VMs). 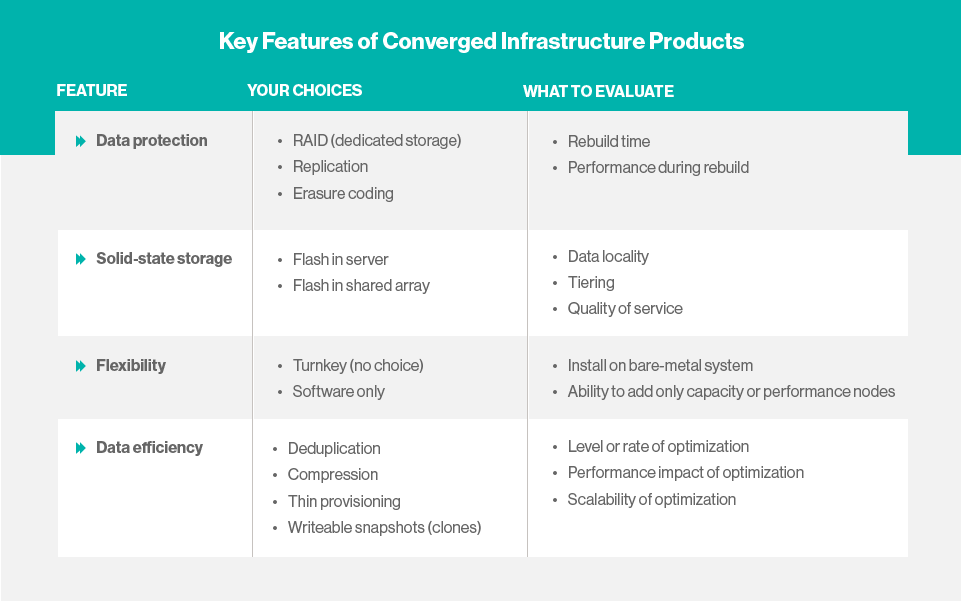 Operationally, converged systems are identical to an environment in which the components are purchased separately. There are two main advantages to this approach:

There are several converged architectures that are not prepackaged. These are reference architectures an IT professional or designated reseller uses to implement the system. These systems provide greater flexibility in terms of mixing and matching hardware, but reintroduce the difficulty of installation. Reference architecture providers typically offer an installation guide that should make it easier to implement. They also have agreed to provide seamless technical support among the components, which should reduce any discussion between vendors and customers as to who is to blame for a possible failure during installation.

Converged systems and converged reference architectures come in a variety of configurations. Some are all-flash, others take a hybrid approach with both hard disk and flash. Because the storage layer is still a separate tier, there is no difference between evaluating a storage system intended for a converged architecture and one that is not converged. The pros and cons of a hybrid versus an all-flash system are the same in a converged environment as in a traditional data center.

The other option is a hyper-converged architecture. Instead of incorporating three distinctly different components, the compute, storage and networking tiers are converged within the hypervisor. This means the storage software either runs alongside or is integrated into the hypervisor. Hyper-converged systems are sold and implemented in nodes that house all these components. Typically, the storage software will aggregate storage from each node in the cluster. These systems provide several benefits over converged architectures:

There are two downsides to a hyper-converged architecture:

Unlike converged systems, hyper-converged systems change the way storage is managed. One of the core requirements of any storage infrastructure that supports a virtual environment is that it needs to provide shared access to a VM's data store. That is necessary for the VM to migrate between hosts. Hyper-converged systems do this by aggregating the storage within the hosts, creating a virtual volume. The virtual volume typically leverages some form of replication or parity-based protection to protect the data from a drive or node failure. The storage in the host can be flash or hard disks.

According to Ben Woo, managing director at
Neuralytix, hyper-convergence is "like
putting all your eggs in one basket." Is this
the path for your firm?

Some hyper-converged systems leverage flash to create two tiers of storage. The flash in the host stores VM data currently active on that host, and then a copy is made to an aggregated (virtual volume) HDD tier for VM mobility and data protection. The advantage of this approach is that VM storage performance is at flash speeds and provides lower network latency since most of the data is local to that host.

All hyper-converged systems are, at their core, software-based. In most cases, the hyper-converged vendor is focused on developing storage software that is scalable across hardware nodes and, unlike a traditional scale-out storage system, runs as a VM within a hyper-converged cluster. For vendors of this software, there are two routes to market:

Hypervisor flexibility should also be considered when evaluating potential converged and hyper-converged platforms.

Most converged systems, because they are software with prepackaged hardware, can operate with a variety of hypervisors. But again, because a converged infrastructure tries to speed up implementation, it often pre-implements the hypervisor with the hardware. The result is a converged system that may not be as flexible as it appears.

According to George Crump, founder of
analyst firm Storage Switzerland, the ability to
mix hypervisors, or pick a particular
hypervisor, is a real limitation in some hyper-
converged architectures.

Converged systems with a custom hypervisor

There are also hyper-converged vendors that don't leverage a top-selling hypervisor. Instead they use a less-expensive, open source -- typically Linux-based -- hypervisor.

While often not as feature-rich, these hypervisors are just as reliable. The advantage is that a hyper-converged vendor now has greater control over how the hypervisor integrates with its hardware and it doesn't have to pay the licensing fee required by the top-tier hypervisor software vendors. The result should be a more-customized, less-expensive system.

While custom hypervisor hyper-converged systems may not have the third-party support of top-tier hypervisors, they may be ideal for small and medium-sized organizations that don't have a large investment in a particular virtualization hypervisor.

Converged vs. hyper-converged architecture comes down to size, flexibility

The benefits and drawbacks of HCI